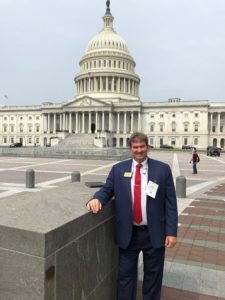 In early June we attended the National Association of Home Builders Legislative Conference in Washington DC. 753 of us in the homebuilding industry from all over the country spent time with our Representatives and Senators at their offices on Capitol Hill to discuss issues affecting the affordability of housing. North Carolina had the strongest showing with 75 members in attendance. We discussed issues such as the flood insurance program, the restructuring of Fannie Mae and Freddie Mac, tariffs, unnecessary government regulation within the industry, and the overall state of the economy.  We were able to have some in-depth discussions and get some insight into what may be agreeable to both sides. Many of these are complex issues and require compromise on the solutions. When it comes to housing affordability issues we do not have “R” for Republican or “D” for Democrat behind our name, we have an “H” behind it for Homebuilding. Republicans and Democrats alike will tell you that there are 6 or 7 national issues that are affecting our country and neither side wants to budge for fear that if they compromise on one issue, they won’t get what they want on the next issue.

Some of these issues will require out of the box thinking to get solutions in place. That is an even harder sell in Congress. The NFIP, the National Flood Insurance Program is run by the federal government. Since Hurricane Katrina hit New Orleans in 2005, the program has been in trouble. The losses occurred during that one event cost over 25 billion dollars. That debt is still owed and continues to grow. FEMA didn’t have funds to pay for the cleanup, so it borrowed from another sector of the government. One sector is charging the other sector interest on those funds at a staggering cost. In Congress, one group wants those funds paid back and until such time they don’t want to talk about flood insurance and how to fix it. I learned a long time ago not to show up and complain about problems if you don’t have a solution. Our solution is to stop the interest since it all comes from the same place. Seems sensible to me, but it’s the government we are talking about. At the end of the day it’s the taxpayers and the policyholders that suffer.  On Wednesday during the Hill visits, one of our Representatives told us he had been meeting with another representative from the other side for 7 hours over the last 2 days and they were close to working out a long-term solution. The next evening, we were informed that the two Representatives had reached an agreement in principle and would be working on draft legislation in the coming weeks.  We already know that some of the issues in the legislation will need to be tweaked but some progress is being made. The main concerns all focus around the current debt, the costs for the policyholders, and the costs for reducing repetitive losses. Hopefully, by September 30 we will get a consensus and have a long-term extension of the NFIP in place. That will be good for the homebuyer, the industry, and the country.

A Moving Moment Comes at an Unexpected Time

While we were in DC the world was marking the 75th anniversary of D-Day. There were many celebrations all over the area. On Tuesday, June 3rd, Sandy and I took a hop on hop off bus tour of DC. We visited The Korean War Memorial, The Lincoln Memorial, The World War II Memorial, and Arlington National Cemetery. They all in their own way are moving tributes to the sacrifices made by servicemen and women throughout our history. After watching the changing of the guard at Arlington, which was impressive, we headed back to catch the trolley to finish the tour.

The most moving part of the day came at a time we least expected it to happen.   While standing in the trolley line with about a dozen other people, a gentleman that was working the trolley line asked if any of us we military. We all said “No”. He said if we were, he would tell us a story about why he was there. Then he asked if we knew anyone serving and we all said “Yes” we did. Then he said, “Let me tell you a story of why I’m here.” The rest I will paraphrase.

He came to this country from Africa, legally he added, many years ago. He was able to go to college and obtain 2 degrees. After college, he worked hard, got married, had children. He never got in trouble or had any issues with law enforcement. He tried to live his life and teach those around him about what it means to be a model citizen. After retirement, he wanted to do something a little different and saw an advertisement that the cemetery was looking for people to work. He took the job not because he needed the money but because it gave him a way to get closer to those that have served or were serving in the military so he could personally thank them for sacrificing all they have to give people like him the opportunity to come to the greatest country in the world to live and be afforded all the opportunities that come along with that.

Many in the group were tearing up at that point and he continued. You just witnessed the changing of the guard at the Tomb of the Unknowns. That tomb is important because it honors those that made the ultimate sacrifice defending our freedom. That tomb is the most visited in the cemetery. The gentleman said, “I believe there is another tomb in the cemetery that is more important.” That tomb is next to Arlington House. It holds the remains of over 2111 unknowns. He explained how to get to it if we had time.

He went on to say that Robert E Lee lived in Arlington House with his wife before the Civil War and that Lincoln had asked Lee to command the northern army. Soon after Lee told Lincoln he could not do that, Lee and his wife left Arlington House for Richmond. It wasn’t long that the first battle of the Civil War was fought at Bull Run in Manassas, Virginia. Several years after that battle Lincoln sent the army to gather the remains from the fallen soldiers at Bull Run and bury them in the rose garden at Arlington House. He knew Lee would never return to that house with a cemetery outside his window. 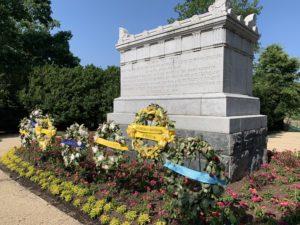 Remember these words and the sacrifices made as we celebrate the 4th of July. May you and your family enjoy your freedom and thank a veteran for it!