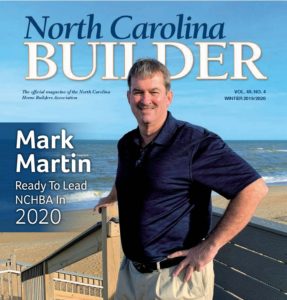 When Mark Martin was installed as President of the North Carolina Home Builders Association (NCHBA) in December of 2019, neither he nor anyone else could have imagined the challenges which lay just beyond the horizon. By March, with North Carolina and the nation squarely in the crosshairs of an unprecedented pandemic, a new playbook needed to be written. Fortunately for NCHBA, Mark Martin was the perfect person to do it as he led our Executive Committee, Board of Directors and staff during this crisis.

The first, and most important, priority responding to the pandemic was to ensure that our builders and all associated tradespeople and suppliers remained in business. This required a determination by our Governor under his emergency powers that the residential construction industry was “essential.” During a frantic three-week period in March, the NCHBA staff was in almost daily contact with the Governor’s Office to supply information and persuasion to ensure that Governor Cooper arrived at precisely that conclusion. Our efforts were rewarded when Governor Cooper made that declaration unlike the dire situation our industry faced in several other states when residential construction was not found to be essential. Over the same period, NCHBA worked in coordination with a number of our local associations across the state to ensure that their local governments found our industry to be essential in their respective local declarations.

When the Governor’s “stay-at-home” order was issued in late March, construction was thus one of the few industries which was allowed to function. The NCHBA staff began working remotely and Mark and his fellow senior officers held weekly virtual calls to make adjustments in the association schedule and work priorities. Arising from a discussion at one of their first meetings, Mark suggested that the association’s top priority should be to provide our members with the most critical information as timely as possible.

Later that week, we began holding a series of virtual NCHBA Town Hall programs with industry experts designed to accomplish this purpose. Each Friday, we armed our members with vital information on how our industry was being affected by the pandemic. A total of 10 virtual Town Hall programs were held with an average of over 300 members either watching live or later listening to the recorded version. In September, almost 450 members joined us for a live program with NAHB Chief Economist Rob Dietz and NAHB Chief Lobbyist Jim Tobin. NCHBA also sent out numerous “Member Update: NCHBA Responds to COVID-19 Crisis” emails on various topics related to the pandemic for which we received many favorable comments from our members. NCHBA also convened our local HBA Executive Officers across the state for a weekly virtual meeting which Mark often joined.

Another major COVID challenge required a new game plan from Mark and the staff. How do we deliver classes in order to allow our general contractor members and other licensees to fulfill the new continuing education (CE) requirements? Prior to the pandemic, our North Carolina Builder Institute (NCBI) had planned an extensive schedule of in-person classes at 52 locations across the state. That plan was scrapped and, with the cooperation of the NC Licensing Board for General Contractors authorizing virtual classes as an option, NCHBA was able to hold a total of 147 live virtual classes in 2020 over 50 class days. Another 138 NCBI classes were offered by several of our local HBAs across the state. Together, almost 5,000 qualifiers were able to fully satisfy their 8-hour CE requirement through NCBI courses and several thousand others benefitted from taking one or more NCBI courses. We estimate that more than one in four qualifiers took an NCBI course.

Despite the challenges posed by COVID, NCHBA enjoyed one of its most productive and successful legislative sessions ever in 2020. The General Assembly enacted, and the Governor signed into law, virtually all of NCHBA’s pro-active agenda.

A second provision allows a property owner the same option to connect a sewer line to a detached accessory dwelling unit (ADU) as is the case for an attached ADU’s on the same lot. Currently, a special permit and engineer’s seal are required in order to pursue this option for detached ADU’s which is not required if the ADU is attached. Eliminating these requirements for detached ADUs will significantly reduce costs and thereby provide more affordable housing across the state.

Under Mark’s leadership, NCHBA continued to play an expanded role in the state’s political arena.

NCHBA membership during the year stayed virtually level at around 14,500 members firms, preserving NCHBA’s position as the largest state association in the National Association of Home Builders (NAHB) federation. Both personally as our NAHB State Representative and through his leadership team and other members, NCHBA continued its strong record of involvement in the activities of the National Association of Home Builders, albeit virtually after March, as would be expected of an association which comprises almost 10% of the membership of NAHB.

Under Mark’s leadership, we continued to make great progress in the implementation of the final year of our three-year NCHBA strategic plan—Vision 2020. Further, despite the COVID challenges which required us to cancel the 21st Century Building Expo & Conference for the first time in 18 years, we nevertheless maintained NCHBA’s strong financial footing by recording a solid 2020 operating revenue profit which thereby increased NCHBA’s net assets to a new record level.

While the foregoing successes highlight several of the many accomplishments during Mark’s term, what makes these accomplishments even more remarkable is that Mark was able to lead this effort virtually. While Mark expertly utilized the talents of an excellent leadership team to assist him, his unselfish service to this association cannot be overstated. His singular dedication and commitment to the association has been truly extraordinary. Mark’s leadership during one of the most difficult times in the history of our association, state and nation will be long remembered.

Last but certainly not least, NCHBA owes a sincere debt of gratitude to Mark’s wife, Sandy, and his wonderful family. Your support has enabled Mark to successfully lead us through the unique challenges of this year that none of us will ever forget. And for that, we are most grateful.